Stewart Wingate is London Gatwick's Chief Executive Officer (CEO). Previously he held different roles within BAA, first as Customer Services Director of Glasgow Airport, then as CEO of Budapest Airport and most recently as Managing Director of Stansted Airport. Prior to that he worked for Black & Decker. Stewart is a Chartered Engineer and Fellows of both the Institute of Engineering and Technology and the Chartered Institute of Marketing. He has a Masters in Business Administration with distinction and a first-class honours degree in electrical and electronic engineering.

Jim was appointed Gatwick’s Chief Financial Officer in September 2021. Prior to that, Jim served in various roles at American Airlines since 1996, including Senior Vice President – Airport Operation and Cargo; President of their Cargo division; and Managing Director of Commercial Planning and Performance.

Jim has previously led airport operations and had oversight of strategic initiatives across American’s global network throughout the United States, Latin America, the Caribbean, Europe and the Pacific.

Jim has also served as a member of the Board of Directors of BAR UK; IATA Cargo Committee and the A4A Cargo Executive Council. Jim is also a licensed private pilot.

Jonathan joined Gatwick's executive team in September 2020. Prior to this, over a three-year period as Chief Commercial Officer at Luton Airport, he helped deliver significant growth in passenger volume, as well as the completion of a significant terminal transformation programme.

He holds a BSc in Air Transport Management from Loughborough University and joined National Express Group as a graduate in 2005, going on to hold several executive roles.

A graduate of the Ecole Nationale des Ponts et Chaussées and the Institut Français d'Urbanisme, Cédric began his career in 1996 at the Paris Chamber of Commerce and Industry. He then joined the Networks Deployment Department of Lyonnaise Communications (Suez Group) before joining the VINCI Group's Cofiroute subsidiary in 2003. He worked for five years as special advisor and subsequently project manager of the Duplex 86.

In 2008, Cédric joined Aéroports de Paris, where he worked for four years as Project director for the construction of the S4 satellite of Charles de Gaulle Airport before becoming Director of the project management division in 2012. He was appointed as Technical Director of VINCI Airports in 2018 and subsequently appointed Chief Technical Officer of Gatwick Airport in May 2019.

Rachel joins Gatwick from Capita where she has served as Group Legal Director and more recently as Chief of Staff to the Capita plc Group Chief Executive Officer.  Prior to that role, Rachel worked as in-house Legal Counsel with Thomson Reuters for ten years.  She trained as a lawyer in her native Australia and moved to the UK in 2006 to work for Linklaters.

John was appointed to the newly created role of Business Improvement Director in October 2017, He began his career with General Electric as a graduate trainee and held a number of senior roles with the company, including MD of their Industrial Diamond business in Ireland and latterly running their pipeline business for Europe and Asia.

John joined Gatwick as Head of Airfield in 2012 and led the rollout of our programme to improve runway efficiency. He went on to oversee the development of our baggage strategy and, most recently, has been driving improvements in capital delivery.

John graduated with an honours degree in mechanical engineering and a Masters in Business from University College Dublin.

David was appointed as HR Director in January 2021 and has over 30-years experience in the oil & energy, aviation and retail industries for brand leaders including BP, British Airways and Safeway.

He joined Gatwick from BP where he worked for 13.5 years. His last role was HR Vice President for BP’s Alaska business which operated the Prudhoe Bay oil field and the trans-Alaska pipeline. David previously worked for British Airways in Operations and HR and started his career with Safeway in Customer Service and Operations.

Bronwen Jones was appointed Development Director on October 2017. Bronwen joined BAA in 1989 as a graduate trainee with a degree in business studies from Aston University. In 1995 she moved to Heathrow Airport and worked in a wide variety of operational roles before returning to Gatwick in 2003 as Head of Customer Services. More recently, as Head of Development, Bronwen has played a central role in some of our largest transformational programmes, including self-service bag drop, the North Terminal development programme and the creation of Gatwick Connects.

Tim joined Gatwick as Chief Planning Officer in February 2017 with responsibility for the development of the long term masterplan and subsequently took on the role of Director of Corporate Affairs and Sustainability, creating a combined Directorate. He was previously Chief Planning Officer at EDF Energy with responsibility for securing consent for the Hinkley Point C Project and progressing the planning and environmental assessment work for nuclear new build at Sizewell. Prior to that, Tim held several planning roles in BAA at Heathrow and Stansted.  Tim has also worked in local government and consultancy.

Nick was appointed IT Director in November 2019. He has worked in mission critical IT environments for nearly 30 years with a specific background in IT Operations, Infrastructure and Enterprise Architecture. Nick has worked in a number of business domains including Financial Services and Manufacturing as well as Transportation with nearly ten years at Network Rail prior to joining Gatwick. In his current role at Gatwick, Nick is responsible for the evolution and performance of IT Business Services and Infrastructure, as well as the delivery of technology projects that form part of Gatwick’s Capital Investment Programme.

Nick joined Gatwick in 2012 and has held several roles including Head of IT Infrastructure and Head of IT Operations, where he oversaw significant improvements in IT system availability and security.

Rachel was appointed Retail Director in July 2020, having joined Gatwick as Head of Retail in 2016. She is responsible the shops, restaurants, media advertising and foreign exchange across the airport. Her role includes developing and executing Gatwick’s retail strategy and delivering projects that add to or reconfigure the retail space.

Rachel began her career at Marks and Spencer as a graduate trainee and went on to hold various roles at the retailer including working in international development in India, Russia and South Korea. She then worked in emerging markets for luxury retailer Burberry before working as a strategy consultant for OC&C and latterly at Homebase.

Lorenzo was appointed Deputy CFO in August 2020. He started his career as an external auditor at PwC before joining VINCI in 2009 as a Financial Controller for Eastern Europe. Lorenzo held different positions in finance and internal audit within the VINCI Group before being appointed the CFO of Nantes Atlantique Airport in 2015.

Before joining Gatwick, he was the CFO of the Salvador Bahia Airport in Brazil since 2017. Lorenzo is a graduate in Finance from the Grenoble School of Business (MBA). 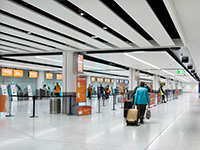 Future plans
A national success, with exciting plans for the future

Future plans
A national success, with exciting plans for the future